The jam was going pretty well, until someone killed the organizer.

Can you solve a murder mystery when everyone's just trying to talk over each other? Choose who's worth listening to and try to catch the culprit!

Theme was: "Stay awhile and listen"

Trying to solve the murder was a bit tricky since I had to refresh the page to read everyone's dialogue. I pulled out a notebook and started writing down everyone's statements.

Continue reading at your own risk! Contains spoilers about the identity of the murderer!

As I was comparing everyone's statements, I realized that the only prime suspects who I found suspicious was Mackenzie and Brrrrdd because Austin, Jess, Hazel and Kevin's accounts match each others' statements as all of them were mostly involved with each other (during the fighting). Mackenzie said Jess talked to Tim at 2:10am but Brrrrdd said Jess went to talk to Tim at 2:00am when she left the common area so this clearly contradicts each others' statements. So I looked at Austin and Hazel's accounts to find proof that corners Mackenzie as the murderer: Austin said that Hazel and Mackenzie disappeared before 3am while Hazel said that she went to take a nap at the quiet room at 3am and fell asleep (Hazel's statement is supported by both Jess and Kevin: Kevin said Hazel left to sleep while Jess said Hazel told Jess she was going to the quiet room to nap). Which concludes that Hazel is not the killer.

Brrrrdd said that she went to the workspace and stayed there until 3:20am. She went back to the common area after that and 10 minutes later, she heard Jess scream. I found this odd because Mackenzie said that he also went into the workspace and stayed there until 3:10am but he never mentioned about Brrrrd also being in the workspace with him (same goes for Brrrrdd). But Mackenzie never mentioned where he was or what he was doing during the last 20 minutes before 3:30am when Tim died whereas for Brrrrdd, she stated she went back to the common area. Mackenzie only said that he heard Jess scream at 3:30am, which led me to accusing Mackenzie as the killer. And as it turns out, it was Mackenzie all along!

Overall, it's a good game but it could've been more polished and executed even better but I still found it enjoyable.

i also cracked open a whole doc to compare everything and refreshed to get everyone's dialogue (bc i was confused how to play the first time). got it right first try, nice !!

I've been relooking for this game for so long - finally found it! :)

I had an entire notepad open to one side while I refreshed the game to get all the dialogue,

I had no idea how to play in the first time and I only talked to Austin and then after that I realized how badly I messed up and then just guessed who did it. I can't believe I was right, though???

A cute, short game. It takes a few tries to learn how to play, but after that it's fine. Art is simplistic, but stylish. Music is atmospheric for the mood, but rather repetitive after a few loops. Story is hard to weed out (as with any good mystery), however uneventful and not-quite built up. Ends on a soft note, leaving no bad taste in the mouth. Worth a play in the browser if you're in the mood for something to pass the time. 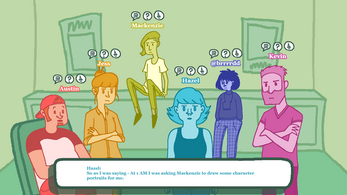 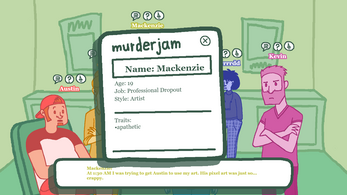 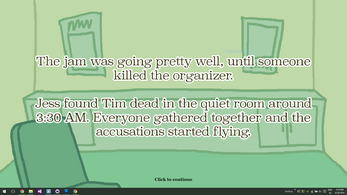